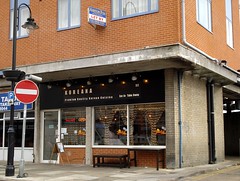 Now closed; was a small Korean cafe/restaurant in Wealdstone (previously located in Oriental City). As of mid-2012 the premises are occupied by an Italian restaurant called Fiore Rosso photo.

The information below is retained for people who want to know what Koreana was like.

Small Korean cafe/restaurant in Wealdstone, ex-Oriental City. They also do takeaway and delivery, and you can order online via Just-Eat.

It's quite small inside, with seating for just 18 people. Despite the colour photo display of dishes above the counter (perhaps a nod to its origins in the Oriental City food court), the ambience is quite nice, with stained-wood tables, box lampshades, a couple of potted plants, and a bead curtain hanging over the window.

Kake visited late on a Thursday lunchtime in March 2009. There was only one other customer. Music was playing on the radio (Magic 105.4). Service was friendly enough.

I was offered the cheaper set lunch menu (which starts at £3.80) but decided to go a la carte instead, with a soft tofu and chicken stew (dak soonduboo jjigae) for £6.50 including rice and banchan (side dishes) photo.

The stew wasn't bad, though the tofu had the characteristic flavour of the aseptically-packaged stuff rather than being fresh, and the chicken didn't taste of much either. I'd chosen the mild version of the stew; perhaps the spicy one is better. The banchan were good, though; a dish of kimchee, a dish of cold cooked beansprouts, and a couple of slices of rolled omelette/pancake. Green tea (£1) was made with a teabag but was actually pretty good.

Kake's verdict: Might come here again if I was in the area; the tofu was kind of offputting though.

Accessibility: No step to get in, everything on one level once you're in, though the single unisex toilet cubicle is very small and cramped. You could probably fit a wheelchair at the tables if the place wasn't too full. Some but not all of the chairs have arms and are fairly narrow.