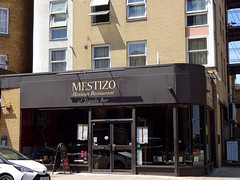 The building is not much to look at, and Hampstead Road hardly provides an attractive location, but inside this is a well-appointed square room, with a bar and service area at the back, and nicely laid out, some smaller tables near the front and the windows, with larger tables towards the back.

The menu is divided into the 'antojitos' (small dishes, like tapas), 'los tacos' (two corn tortillas with a range of fillings), and main dishes. All tables are provided on arrival with small bowls of crispy tortilla chips and a selection of dipping sauces photo.

We've visited several times now, most recently in June 2019. When Ewan and Kerry visited on a Saturday evening in January 2010, we had trouble getting through on the phone line but showed up in person and were able to get a table until 8pm, which suited us fine. It was very quiet at 5:30pm, but filled up quickly, meaning reservations would probably be necessary in the evening. On a return visit in May 2012, Ewan and friends were able to get a table for five on a Friday evening (though it was relatively early). On a Monday lunchtime in June 2019, Kake and friend had booked online but could have got away without it, as aside from one large group on a table toward the back, there were only three other customers at 12:30pm. Peaceful music was playing on this latter visit, not too loud.

In January 2010, Ewan and Kerry shared a couple of antojitos and a couple of the tacos, and found this suitably filling. Guacamole (£5.50) was a large plate loaded with tortilla chips and a very tasty freshly-made avocado dip in the middle. The tamales of 'pollo con mole' (£5.40) were also lovely, wrapped up in corn husks and steamed, producing a spongy, tasty snack. Tacos were also excellent, with the filling laid neatly over the two tortillas, and a side of salsa on each plate.

To drink we shared a two-pint jug of the house margarita (£26), nicely frozen and certainly not disappointing. The dessert menu was far more basic, but Kerry's flan received high praise, while Ewan had a crispy pancake-like dessert drizzled with sugar syrup, which was simple but satisfying.

In May 2012, Ewan's molcajete Mestizo photo was certainly hot in both senses (the volcanic stone bowl retained heat very well) and served with tortillas, just enough to finish off the whole thing between two of us. A frozen margarita was still good quality and satisfying.

In June 2019, Kake's roasted vegetable quesadilla (£6.50 on the lunch menu) photo was pretty good; the vegetables were only lightly roasted and retained a good amount of bite, which worked well. The tortilla was fine but nothing special. I liked that they hadn't gone overboard on the cheese, and the guacamole on the side (75p extra) was quite refreshing due to being heavy on the chopped tomato.

Special diets are well catered for, with vegan, nut-free, lactose-free, and wheat/gluten-free menus all available (though you have to ask for them). When itsbruce visited in May 2012 with a party of vegetarians and vegans, they all loved the food. Kake and friend also ordered from the vegan menu in August 2013, and found it all quite tasty.

itsbruce found the service a bit random on a May 2012 visit, with drinks misplaced or forgotten, and some people having very long waits for their food.

Allolex's verdict: Mestizo offers very good quality, authentic Mexican food at a reasonable price. It's the best I've had in London so far. They also have good margaritas.

poooook says: They have a very large selection of tequila! Thursdays are 'Jueves Mexicano' (Mexican Thursdays) in their downstairs room (they describe it as "a club lounge") so are expected to be busy.

Accessibility: Very small step (more of a ridge) to get in, and there's an accessible toilet on the ground floor.