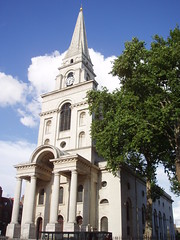 An area of East London lying within the London Borough of Tower Hamlets (in the E1 postal district).

Spitalfields is dominated visually by Nicholas Hawksmoor's Christ Church (pictured) and is famous for the market opposite. This still operates a thriving business on Sundays, but is largely dominated by designer fashion and knick-knacks for the up-market crowd who have thoroughly gentrified what used to be a distinctly poverty-stricken area. One doesn't have to venture far from the market to find areas of impoverished council housing, with a largely Bangladeshi population, as depicted in Monica Ali's Brick Lane (and its film adaptation).

The famous curry houses of Brick Lane are thus dominated by Bangladeshi cultural influences, and have long been well-known to the tourists (if not the food-lovers) of London. Even as Tower Hamlets passes increasingly draconian by-laws attempting to curb the perceived pushiness of the curry restaurants, the street retains much of its liveliness. This is helped by the bars and relatively recent cultural quarter on Dray Walk, formed from the shell of the now-closed Ben Truman's Black Eagle brewery near the top of the street.

Auto-generated list of things in Spitalfields (view them on a map):