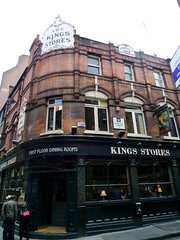 It's in two halves inside, though there's free passage between the two. Entry is into a space which clearly prioritises vertical drinking, with high stools and tables leaving plenty of standing space and just one normal-height table in a corner with four chairs. The other side has tables pre-set for dining, with cutlery, water glasses, and thick paper napkins.

Floors are dark varnished wood, exposed brickwork is used as feature walls, and paintwork is a combination of cream and dark grey.

Kake visited on a Wednesday lunchtime in September 2016. When I arrived just after their opening time of noon, there were several customers outside and about 15 or so inside, all men in suits and almost all engaging in the aforesaid vertical drinking. Rap music was playing, at a level which was a little too much in combination with the loud conversations going on.

All five handpumps were on, clipped for Wadworth Swordfish, Wadworth Bishop's Tipple, Sambrook's Wandle, Man Of The Match, and Greene King IPA. A pint of lime and soda was £2.20. Service was friendly.

According to their website as of September 2016, food is served noon-10pm Mon-Sat and noon-9pm Sun.

Accessibility: A large step to get in at the main entrance, though there might be step-free access at a side entrance (not checked). Once you're in, it's level to the bar, seating, and RADAR-locked accessible toilet. Other toilets are possibly on the first floor (not checked). Almost all of the seating in the non-dining area is on high stools.