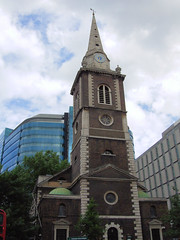 Originally the site of the eastern gateway into the City of London, Aldgate is now largely dominated by office blocks, ceding way to housing estates and cut-price shops towards Whitechapel in the east. It lies on the borders between the EC3 and E1 postal districts.

Running from Aldgate to the north is Brick Lane (which at its southern end is called Osborn Street), dominated by Bangladeshi curry houses. It is also a short walk to Liverpool Street and Fenchurch Street mainline rail termini.

Auto-generated list of things in Aldgate (view them on a map):