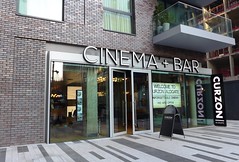 A cinema showing a mix of arthouse and mainstream films near Aldgate East Station (and not too far from Aldgate Station), part of the small Curzon independent group of cinemas. It was opened in January 2017 as part of a new housing development off Commercial Road, between Alie Street and Leman Street.

There are four screens, each much the same size. As it is custom-built as a cinema, chairs are comfortable and there is plenty of space for legroom between each row (although look out for footrests in the dark, as these are easy to trip over while trying to move along the rows).

There's a sizeable bar around the entrance and stretching back past the counter to take in some booths to the side. The bar serves a range of beer, wine and cocktails and is open to everyone. Tickets are checked around the corner.

Accessibility: All screens, toilets and bar facilities are on the same level, accessible without any steps from outside. There are hearing loops in all four screens.