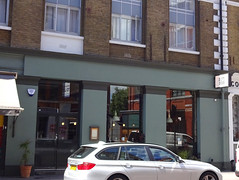 Thai restaurant and bar on the Whitechapel/Spitalfields border. It opened in early 2016 after previous pop-up incarnations in Peckham and London Fields.

Note that as of June 2017 they don't take bookings in the evenings unless there are at least four of you.

Entry is into a relatively well-lit bar with a couple of booths along one wall and stools both along the bar and clustered around communal tables in the centre. This is used both as a waiting area for the restaurant, and as a bar in itself. Further back, and more dimly-lit, is the dining area, with a semi-open kitchen at the back.

Kake and six others visited on a Friday early evening in June 2016. We'd booked, but were asked to wait in the bar until our entire party had arrived. Cocktails feature similar ingredients to the food, and craft beers are available too. Bamboo planter's punch (£9) was a little disappointing; the promised pandan syrup was hard to detect under the overwhelming flavour of rum.

Once seated, we were advised to order 14 or 15 dishes between the seven of us; portions are relatively small, and dishes designed to share.

Mu yaang (pork neck in a tangy dressing; £6.50) was still pink, which gave it a juicy, chewy texture and a flavour that stood up nicely to the dressing. Kake would definitely order this again.

Lon khrua (coconut and smoked fish relish served with pickled morning glory, fruit, and vegetables; £9) was pleasant enough. Kake found this hard to judge on its full merits as the relish itself got separated from the rest of the dish — I only realised later that it should have been eaten with the raw vegetables that had wandered over to the other end of our table, but can see this working well and would like to give it another go in its proper form.

Nahm dtok pla thort (deep-fried seabass with herbs and roasted rice; £16) was well-judged; fried to a crispy exterior without drying out the interior too much, with a flavour boosted by the fresh herbs and tangy dressing. Some of our party found it too salty.

Isaan-style som tam (green papaya salad; £9) was fine, with added interest from the use of pla ra, an opaque style of fish sauce with a depth of funky flavour similar to fermented tofu. Some of our party found this one too spicy, but Kake enjoyed the chilli heat, as this was mostly quite muted in our other selections.

Yum naem khao thort (fermented pork salad with rice cakes; £8.5) had an interesting texture, and gave a nice hit of umami against the other dishes.

Yum makeua yao (grilled aubergine salad with egg and prawn floss; £8.50) had a subtly smoky flavour — just enough to be interesting but not overpowering — which contrasted well with the sour and salty dressing. The prawn floss sounded interesting, but didn't seem to add much to the dish; it was very finely-shredded, and neither strongly-flavoured nor notably-textured.

Rice was charged per-person (£2.50), and both sticky rice and jasmine rice were brought to the table. Our final bill excluding drinks and service charge came to £22.70/head for 12 savoury dishes and 3 desserts, which turned out to be about the right amount of food.

Service was efficient, enthusiastic, and very friendly, though in one instance bordering on weirdly over-intimate. Dishes arrived at our table somewhat too quickly; Kake managed to overlook trying a couple of the things we ordered as there was so much all at once. (We'd asked if we could order in two waves, but were talked out of it.) A 12.5% service charge was added to the bill.

Kake's verdict: Overall, I quite liked the food. There was possibly too much emphasis on sourness and saltiness, but this may have been down to the selection of dishes I actually managed to try, and in any case is a vast improvement on the overly-sweet flavours a lot of London's Thai restaurants go for. The evening ambience is perhaps a little too rushed and busy for my taste, but I'd happily come back for lunch.

Accessibility: A step to get in. Step-free to the toilets once you're in. The booths in the bar and restaurant areas are up a couple of steps.