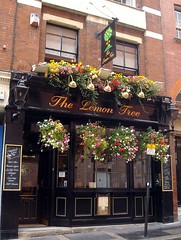 Small traditional pub near Trafalgar Square. It was a Jack Beard's pub photo until mid-2010, when the Jack Beard's chain went into administration. It's now run by All Our Bars.

Entry is into a single small room with the bar facing you. The decor is clean and uncluttered, and a large print of the 1851 Banks & Co Balloon View of London decorates one wall. There's seating for about 15 people on tall stools, mostly arranged at the drinking shelves which line the walls, though there's also a couple of freestanding tall tables. There's really not much space; it'd feel full with 20 people in, and crowded with 30.

Given its location in the heart of Theatreland, it's notable that it manages to avoid attracting tourists. On Kake's Thursday early evening visit in July 2013, there were seats free at 5pm, though the Harp round the corner was packed. Similarly, on bob's Saturday afternoon visit in June 2019 the pub was not busy at 2pm even though others in the area were.

There are five handpumps on the bar. In July 2013 these offered Sharp's Doom Bar, Marston's EPA, Nelson's Friggin in the Riggin (£3.95/pint), and Harvey's Best, while in June 2019 they had (well-kept) St Austell Tribute (£4.85/pint), Tiny Rebel Cwtch, Trumans Zephyr, Harvey's Sussex Best and Sambrook's Wandle.

There's a smaller room upstairs as well, again seating about 15; this tends to be quieter, though it can be booked out for private functions so may not always be available.

Food is served; mostly Thai, with a small selection of English pub standards. According to a menu seen in July 2013, it's served noon-9:30pm Mon-Sat and 1pm-7pm Sun, though a board outside on the same visit photo claimed noon-9pm Mon-Sat and 2pm-7pm Sun.

Accessibility: There's a step to get in. All seating on the ground floor is on high stools. There's a gents' toilet on the ground floor, but the ladies' is on the first floor, up a staircase with a sturdy handrail part of the way up and a handrail-less bend at the top.