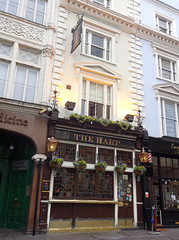 Good Beer Guide pub near Charing Cross Station and the National Portrait Gallery, in Covent Garden. Previously owned by Punch Taverns, it became a free house in mid-2009 when the landlady bought the freehold. On her retirement in 2014 it was bought by Fuller's. It won the CAMRA National Pub of the Year award for 2010.

It's usually pretty busy, no doubt due to the proximity of Theatreland and Charing Cross, but it's not always as crowded as it looks; force your way through the throng at the front and head to the back or upstairs, and you shouldn't have to wait too long for a seat. Note though that the upstairs room (which seats about a dozen) is bookable, so may not always be open. The windows at the front are opened in nice weather to let the breeze and sunshine in.

They have six handpulls, which were all in use on our May 2009 visit. A commenter known as tallpaul tells us that as of January 2009 the regular beers were Harvey's Sussex Best, Black Sheep, and Landlord, plus two guests. Other beers we've seen here in the past include White Adder, Belhaven Fruit Beer (£2.90 in August 2007), Bateman's XXXB, and Spitfire.

They also generally have real cider/perry in polypins in the fridge; the current options are listed on a board opposite the bar. In July 2013, the staff were happy to recommend a cider for Kake, and to give a taster of it too: Orchard Pig Philosopher (£3.90/pint).

When the Iterative Pub Crawl visited on a Thursday afternoon in May 2009, there was room to sit on the ground floor, but only at high tables with stools. On a previous Thursday evening visit in May 2008, it was packed downstairs at around 9:30pm but the small room upstairs had a very pleasant quiet ambience, with a couple of tables free, and it gradually emptied as the evening went on.

The only food served is sausages in baguettes, but they're "award-winning" sausages, and they're served all day.

Ewan's verdict: Beers are well-kept, staff are friendly and, although it doesn't look much from the outside, this is definitely one of the better pubs for this area, if you can find somewhere to sit or even stand.

Kake's verdict: It's great to see such a good choice of real cider, and the staff are friendly and knowledgeable. The only downside for me is the lack of accessibility.

Accessibility: Not sure if there's a step to get in; think there might be a small one. The interior is very narrow and at peak times it's quite hard to get through to the back even if one isn't in a wheelchair. The staircase to the upstairs room (and the toilets) is narrow, steep, and winding.