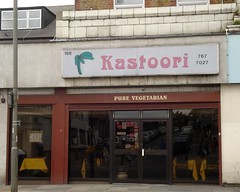 Kastoori was a family-run restaurant in Tooting serving vegetarian Gujarati food with an East African influence. It closed in late 2010.

Family-run restaurant in Tooting serving vegetarian Gujarati food with an East African influence (the family spent some time living in Uganda, according to Jay Rayner's review linked below). All the food is vegetarian, and about half of the dishes are also suitable for vegans (and are marked on the menu with an asterisk).

secretlondon visited with a group of seven in May 2009. One of the party travels across London to eat here on a regular basis. We had a mixture of starters, including the dahi puri photo and chilli paneer. For mains we had two thalis, a portion of chilli banana photo (from their family specials section of which only a few are on each day), the beans of the day, various breads (including bhatura photo) and paneer passanda photo (stuffed cheese). For dessert we were recommended to try the shikhand photo as it was good, and hard to find in London. It didn't disappoint! A group of seven with no alcohol came to £17/head.

Kake, Ewan, and four friends visited on a Sunday evening in January 2008, shortly after the announcement that Kastoori had been awarded a Bib Gourmand in the 2008 Michelin Guide. We messed them about slightly with the reservation (having reserved for ten people but ending up with only six) but they didn't seem too put out. Indeed they may have been slightly relieved, since they would have had to rearrange tables to fit a group of ten. We ended up on one of two tables for six set on a dais above the rest of the room; it was, unfortunately, a bit cramped, with people on one side of the table all having to get up if someone further in needed to get out.

The food was very good, though, and extremely well-priced. We liked the dahi puri starters (£3.25 for five pieces) - little crisp shells filled with a tangy yoghurt sauce, to be popped in the mouth and eaten in one photo (not ours). It's also worth mentioning that they had no problem bringing us six pieces rather than five (and the same for our other starter, which I think was mogo bhajia, £2.75 for five pieces), so we could all try one.

The stand-out dish for most of us was the oro (£5.25) - a roasted aubergine curry which is only available on Sundays. It was smoky and tasty and not too oily, and we liked it so much that we ordered another portion of it partway through our meal. The khichdi, or moong rice (£2.75) is also only available on Sundays; opinions were mixed on this one, with some finding it a little stodgy but others hoovering it up. There are in fact several dishes on the menu which are only available on certain days; this is fine by us, since Kastoori certainly merits several revisits.

The only disappointing dish (at least for Kake) was the kofte curry (£5), which was pretty much as described in the Time Out review linked below: "a let-down [...], the vegetable dumplings swamped by diced vegetables in the oily sauce". (But then it did contain peas, and I dislike peas unless they're very very lightly cooked or even raw.)

We ended up paying £20/head, including tip, for ample food for six plus two bottles of a very nice Sauvignon Blanc (£13/bottle) and a couple of Cobra beers. This is very good value for London.

The decor is neither scruffy nor overly posh; we particularly liked the bright yellow tablecloths and matching linen napkins. They do takeaway, but I believe not delivery.