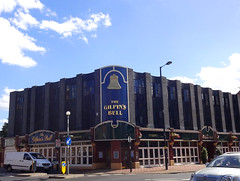 Pub in Edmonton. It was previously a Wetherspoons photo, but according to the Jun/Jul 2016 London Drinker it was taken over by new owners in March 2016.

It still looks fairly Wetherspoons-like, with a patterned carpet, a couple of fruit machines at the back, and a mixture of tall tables, normal-height seating, and two or three tucked-away booths. The initially low ceiling rises up dramatically as one moves further into the pub, and a large skylight becomes apparent right in the middle of the place, allowing in some very welcome natural light and making the place less dim than usual for a Wetherspoons shop conversion. A small sofa area is hidden on a dais (with a ramp to the side for step-free access). There's a reasonably-sized patio beer garden out the back.

Kake visited on a sunny Thursday afternoon in September 2016. There were quite a few people in when I arrived shortly after 2:30pm, and more outside in the beer garden. Music was playing quietly: Nancy Sinatra and the like. The flatscreens were showing horse racing with the sound on. The place wasn't particularly well-cleaned; there were crumbs all over the tables.

Although the pub has ten handpumps, these were clipped for just three relatively uninteresting ales: Ruddles, Abbot Ale, and Bombardier. A pint of lime and soda was 80p.

According to a menu seen in September 2016, food is served 10am-10pm Mon-Sat and 10:30am-9pm Sun. As well as standard pub food such as fried breakfasts, jacket potatoes, pies, and scampi and chips, there's a Middle Eastern influence with dishes such as grilled halloumi wraps, Turkish sausage panini, lamb shish, and taramasalata.

Accessibility: No steps to get in, and step-free to the toilets once you're in. One of the cubicles in the ladies' has a door that opens outwards. There's also a RADAR-locked accessible toilet with nappy change facilities (a sign says the key is available at the bar). As far as we could see, there's step-free access to all the interior seating. There is a step to the beer garden though.