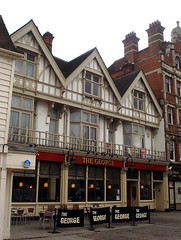 The George was a pub in Enfield Town. It has now closed and turned into an O'Neill's photo.