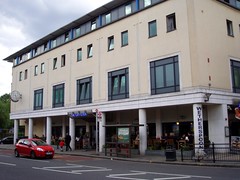 Kake and friends visited again on a Thursday afternoon in July 2013, during the Wetherspoons cider festival. They had two of the festival ciders on: Westons Rosie's Pig and one other.

The pub has an upstairs bar which is bookable for private functions (although on a cursory glance there weren't any real ales up there). There's also some outside seating.

Accessibility: The main downstairs bar area is over several levels, but there's step-free access through one set of doors to the bar and most if not all of the seating. The toilets are up a flight of stairs. There's a lift for step-free access to an accessible toilet, but this was out of order on our April 2009 visit; we didn't verify it was working on our July 2013 visit, but there were no signs saying there was a problem with it.