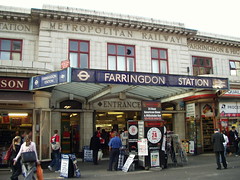 In 2012 a new National Rail ticket hall was opened across from the Tube entrance on Cowcross Street, giving access to the Thameslink platforms photo.

At peak times on weekdays, some southbound Thameslink trains used to split off the main line south of here to terminate at Moorgate, but this service ended permanently in March 2009.

Accessibility: Both Cowcross Street ticket halls are step-free from the street. There is step-free access (via lifts) from these ticket halls to the Thameslink and the Tube platforms.