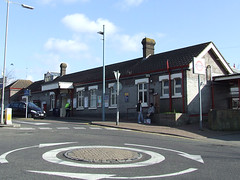 Metropolitan Line terminus in Zone 9. It's also a rail station, with trains terminating at Marylebone (as well as Aylesbury, in the other direction).

It's actually quicker to get out here from central London than you might think; Kake got here from Bermondsey/London Bridge in about an hour (Jubilee Line to Finchley Road, then make sure to get a fast Amersham train rather than a stopping one).

Facilities: there's a coffee/snacks/newspaper kiosk on the platform; it also carries a few walkers' maps.