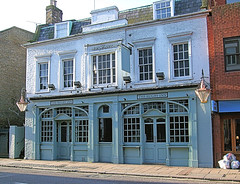 Now closed; was a pub/bar in Twickenham.

Previously known as the Grand Union photo, according to Richmond & Hounslow CAMRA as of December 2011 it had been painted green and renamed to the Rugby Inn. According to the Feb/Mar 2012 London Drinker, it then closed and the lease was advertised for sale.

Richmond & Hounslow CAMRA also reported that as of March 2012 the lease had been taken up by the previous management of the Crown on Richmond Road, who intended to move there at the end of April. However, as of September 2012 the premises were shut up, with a sign noting that they were closed until further notice, and warning that everything valuable had been removed and a caretaker was on the premises.

As of February 2015, Twickerati reports that it's due to open as a branch of Blue's Smokehouse.

The information below is retained for people who want to know what it used to be like as the Grand Union.

Bob visited on a Saturday afternoon in November 2008. It was a Rugby International match day, so this review is unlikely to reflect the reality of the rest of the time.

All beers were £3.50/pint. Before the match there was Greene King IPA on, but this had run out after the match. The Guinness was fine. They also ran out of most of their lagers, and were reduced to only Fosters at the end. Out back they had a heated area and a bit of car park where burgers and hot dogs were being sold for £3.50. In fact all of the sofas which I suspect are normally indoors were out there too. They have several plasma screens. If nothing else, it made a change from the Cabbage Patch.