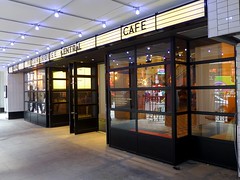 The screens themselves are well-equipped, modern black boxes with a gentle rake and very comfortable seating as well as plenty of legroom. There's some historical interest to the Arthurian Fireze seen along the main escalator ride up from the lobby level photo, which is explained by a plaque photo.