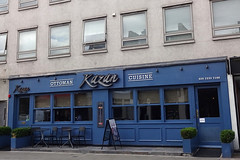 Inside, the main room stretches back a fair way from the frontage, with a low ceiling and not much natural light except at the front. The ambience and decor are fairly smart. Comfortably-padded leather chairs flank polished marble-effect tables set with ribbon-tied white linen napkins, and wine and water glasses are arranged elegantly on a subtle diagonal across the table. There's also a side room, which is smaller and cosier.

Kake has visited twice now, both times accompanied by a friend, most recently in June 2017. When we arrived around 1pm on a Tuesday lunchtime in October 2010, there were a fair few people in, but plenty of free tables. No music was playing, though there was already plenty of background noise from people's conversations. The number of customers was similar on a Friday lunchtime in June 2017, but this time Turkish music was playing, not too loud.

Turkish bread photo and olives photo were provided free of charge both times, and there was no problem bringing us tap water. The bread was fresh, warm, sesame-speckled, and wholemeal (the latter being a welcome change from the usual white version).

We only wanted a light lunch on both our visits, so we ordered the vegetarian mezze platter to share (£18 in June 2017) Oct 2010 photo, June 2017 photo. Although the portions on this were relatively small, the quality was good. Each individual item had a distinct combination of flavours which nevertheless went well with everything else on the plate. Precise knifework was evident, and they'd also added interesting finishing touches such as a topping of pomegranate seeds on the tabbouleh.

They have a reasonably extensive wine list Oct 2010 photo, but we focused on their non-alcoholic cocktail list Oct 2010 photo — Turkish lemonade (fresh mint, lemon juice, sugar syrup, lemonade, rose water; £4.50 in June 2017) photo and Kazan delight (pomegranate juice, apple juice, rose petal syrup; £4 in Oct 2010). Both of these were nicely balanced, not too sweet, and a reasonable size. They also sell ayran, a Turkish drink based on yoghurt.

Our bill both times was accompanied by four small cubes of some very competent Turkish delight, studded with pistachios and very lightly dusted with icing sugar. No service charge was included in October 2010, but in June 2017 there was an auto-added 10% charge.

Kake's verdict: The prices are perhaps a little high for the quantity you get, but I generally prefer quality over quantity anyway, and I had no complaints about the quality here. I would like to come back and try some of their grilled meats, and I'd make a special journey to do so.

Accessibility: A ramp to get in, and step-free to all seating and to the toilets once you're in.