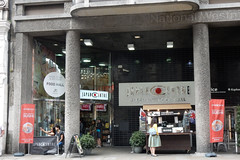 It was originally located on Piccadilly photo, then moved to Regent Street in 2009 photo (see earlier version of this page), and moved again to Shaftesbury Avenue in 2013.

The Shaftesbury Avenue location is somewhat smaller, and the main part is accessed via escalators from ground level. Ceramics are on the ground floor at the bottom of the escalators, and during some of the opening time there's a hot food cart outside on the forecourt.

Accessibility: Access is via escalators; there don't seem to be stairs or a lift. It's quite cramped, with narrow aisles.