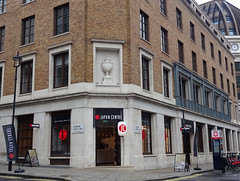 The Panton Street location is currently the main Japan Centre branch, and sells a wide range of different Japanese food products, including baked goods, tea, sake, a small selection of fresh vegetables, fresh tofu photo, frozen items photo, dried seaweeds and other ingredients photo, bottled sauces and condiments, and fresh meat and fish. It also stocks a small selection of books and ceramics photo, though not as wide a choice as at the abovementioned ceramics and book shop.

Although its website describes it as having separate "specialist rooms" for tea, miso, and sake, these are really just themed alcoves along one wall, with shelves surrounding small central island displays. However, it's notable that as well as prepackaged versions, the tea and miso are available by weight.

The layout is generally quite awkward, with long walks back and forward to get to the point where you can pay, and no thought seems to have been given to the flow of customers who've already paid and now want to leave. When Kake visited in October 2017, there was a long queue at the checkout even though the place was relatively quiet, not helped by there being only one member of staff on the tills who was also very carefully packing everyone's groceries after ringing them up.

In one corner, there are chilled displays of sushi and sashimi, and there's also a central hot food station, with all food available to take away or eat on the premises. Hot sake is available for drinking in. The "central courtyard eating area" advertised on the website is rather over-advertised, being just an area in the middle of the shop with chairs and tables, but it does the job.

In October 2017, Kake tried the avocado and aburaage brown rice nigiri (£3.60 for eat-in) photo. This wasn't bad; it was nice to see brown rice, and the rice was cooked well and lightly seasoned. The assembly was a bit slapdash though, with the surrounding bands of seaweed starting to come undone and the avocado falling off one of the pieces.

Accessibility: A step with no handrail, then two more, then the main staircase (with sturdy handrail on both sides), then two more steps with no handrail to get in at the main entrance. There's a flat entrance at the side, with a lift from here to the main area in the basement, but when we visited in October 2017 this entrance was marked as "no exit" and the lift was out of order. There is some form of customer toilet in the basement (not checked).