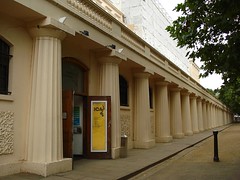 An multi-media art space on The Mall, near Trafalgar Square.

This is primarily an exhibition space, comprising a number of rooms with rotating exhibits of modern art, primarily plastic arts and media arts. They have a performance space where gigs (and occasionally media installations) are held. Entry is free before 11pm (afterwards it's £2 for non-members).

There is a cinema with two screens (one larger and one the size of someone's living room), which show an eclectic selection of films unavailable at any other cinema. The ICA distributes many of the films it shows, which it often releases on DVD as well.

Attached to the ICA is a shop (with a good range of books, as well as magazines and DVDs which are largely unavailable elsewhere), as well as a cafe/bar photo serving food (noon-2:30pm and 5pm-10:30pm Monday, noon-2:30pm and 5pm-11pm Tuesday to Friday, noon-4pm and 5pm-11pm Saturday, noon-4pm and 5pm-10pm Sunday). The menu is generally quite short, but gives a range of options across categories such as entrees, mains and burgers (as well as a few desserts) and includes vegetarian options. Ewan's grilled vegetable bastillia (£8.50) was a bit like a larger wrap with flaky filo pastry wrapping, and very tasty too. As of writing (October 2008), there is a special offer for a burger and a glass of wine or beer for £8 if you're going to a film at the ICA.

The bar serves a good selection of premium alcohols, including Leffe (£2.20/half), Heineken and Beck's (£3.20/pint) on draught, and house wine for around £3 a glass.