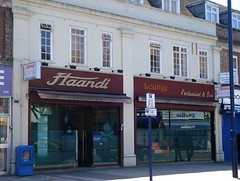 Haandi Lounge was an Indian restaurant in Edgware. It has now closed. As of September 2017 the premises are occupied by a kosher supermarket called Hadar photo.

Indian restaurant in Edgware, in the 2007 Good Curry Guide. It's part of a small chain, which (according to their website) originated in East Africa, specialising in North Indian frontier cuisine. At the time of writing they have branches in Kenya and Uganda along with two branches in London; the other London one is in Knightsbridge.

Inside, it's not as big as it looks from the outside. Entrance is through a narrow corridor delimited by a bar on the left and a fishtank set into the wall on the right. This leads to a nice little sofa area, and then around to the dining area, which is light and airy and full of greenery photo. The kitchen is on display through a window at the back of the room.

Kake and Laura visited on a Saturday lunchtime in May 2009. We were the only customers apart from one other person who left shortly after we arrived. Complimentary crudites and chutneys photo arrived at our table shortly after we sat down, though we didn't get any poppadoms. We had to ask for tap water, but it arrived swiftly enough.

We decided to order a couple of vegetarian main courses to share (the menu doesn't list any side dishes), as well as some chilli paneer (listed as a starter, but we asked for everything to arrive together) plus rice and bread.

It was all good. The chilli paneer (£5.10) photo was well-flavoured and nicely fried without being greasy. Bhindi masala (£5.50) photo was also tasty, cooked thoroughly, flavoured nicely with herbs and spices, and without any nasty stringy bits. Dal bukhara (£5) photo was rich without being heavy. Steamed rice (£2.10) was fine, as was the paratha (£2.10) — and we know the latter was freshly made, since we saw it being made through the window at the back which looks onto the kitchen.

Service was friendly, but the background music was bizarre; Erasure and Celine Dion.

Kake's verdict: I'd come back if I was in the area. I'd like to try some of the meat dishes.