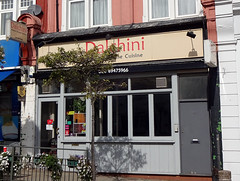 Indo-Chinese restaurant opposite Wimbledon Park Station, offering Indian versions of Chinese food (sometimes known as "Hakka" cuisine, though this is something of a misnomer).

It was previously known as Dalchini (pictured), but had a change of management and name in Spring 2019. When we visited in May 2019, the change was so recent that they hadn't had the chance to put a new sign up yet.

The restaurant seats around 45 at tables covered with white linen tablecloths and set with water glasses, cutlery, and bottles of soy sauce. The walls are painted a soothing grey, the floor is varnished boards, and chairs are dark wood with tied-on grey cushions. Around a third of the seating is on a dais, separated off by wooden railings. A couple of small touches help keep the decor from looking too stark, such as the dado rail made from halved wine corks and a display of black-and-white paper fans on the wall.

Kake has visited twice now, most recently in May 2019. My first visit, in the company of bob, was on a Tuesday lunchtime in October 2018. There were five other customers when we arrived a little before 1pm, and another seven arrived while we were there. '80s-style electronic music was playing, not too loud, but a little incongruous in terms of style.

Chow chu cauliflower (£5.50) photo met with a mixed reaction; bob liked that the batter was crunchy, but Kake felt it was unnecessarily hard, and also a bit greasy. The cauliflower inside was cooked just right, though.

Hakka aubergine (£7.25) photo was cooked nicely soft as promised on the menu, but the advertised chilli, garlic, and soy sauce were quite muted. The sauce was somewhat gloopy, and rather too similar to that in our tofu dish.

Tofu, mushroom, and baby corn with white pepper, garlic, and oyster sauce (£7.25) photo did indeed have a good flavour of white pepper. However, the tofu was a bit hard, the mushrooms were a bit chewy, and although the baby corn was just fine there were only a few pieces of it.

Steamed rice (£3.30) was quite watery-tasting, and probably not actually cooked by absorption as one would have expected for "steamed" rice. It was a generous portion though, enough for two people.

My second visit was on a Friday lunchtime in May 2019. There were four other customers at 1pm, and two more arrived while I was there. The music had moved on around a decade since my last visit, now being situated somewhere in the '90s.

Salt & pepper okra (£6) photo was pretty good; the sometimes-slimy texture of okra was well-controlled, and the batter was crisp and greaseless. It was a little over-salted to my taste though.

Hakka paneer with steamed rice (£6 on the "Express Lunch" menu) photo was OK; nothing exciting, but it did the job. I liked the large amount of finely-chopped garlic in the sauce, cooked enough to tame the harshness. The rice was less watery than last time.

Kake's verdict: I was somewhat disappointed with my first meal, but this may have been partly down to our ordering choices — going vegetarian was possibly a mistake, especially since we had to avoid the paneer dishes due to bob's lactose intolerance. My second meal was better, but I'd still hesitate to recommend it unreservedly.

Accessibility: A small step to get in, no more than an inch or so. No further steps to the toilets, and the ladies' doubles as an accessible cubicle with grab bars and a low sink but no alarm cord. Some of the seating is on a dais, up a large step.