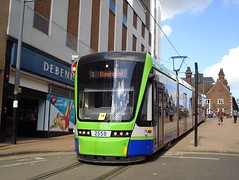 It stretches from Wimbledon Station in the west via Mitcham Junction Station to Croydon itself, then continues towards the east, splitting off into branches that terminate at Beckenham Junction Station, Elmers End Station, and New Addington Tram Stop. Most of the route is bi-directional, but there's a one-way loop in central Croydon.

It used to be divided into numbered routes, but in February 2018 the system was adjusted to remove the numbers and restructure the running; as part of this, New Addington lost almost all of its through services to Wimbledon, while Beckenham Junction and Elmers End lost their direct services to West Croydon (though the other direction is still possible without changing).

List of all Tramlink stops (view them on a map):