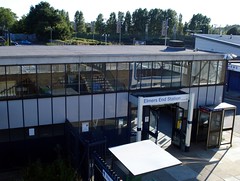 Zone 4 rail station in South London with trains to Charing Cross (or, occasionally, Cannon Street) via London Bridge. It's also a Tramlink terminus.

The station is reached by steps down from Elmers End Road. There's a car park on the same level as the station, and there are some of those upside-down U-shaped things to lock your bike to (not under shelter though).