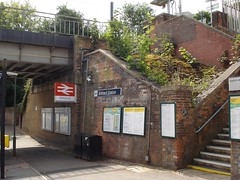 Zone 4 rail station and Tramlink stop in the London Borough of Bromley.

It has only two platforms, which face each other across the tracks. One is used for National Rail and the other for trams, with trains/trams running in both directions from each platform.

Access to each platform is via steps from Elmers End Road. There's no direct route between the platforms; changing from one side to the other requires going down one set of steps and up the other.