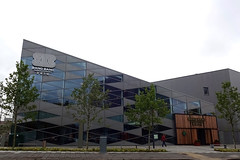 It opened in July 2017 in a newly-constructed and rather eye-catching building located on the site of the old Oriental City. On the ground floor there's a restaurant (Golden Dragon) run by the Royal China group, and on the first floor is a large food court with two dozen kiosks around the edges and a plethora of seating in the centre.

The procedure in the food court is similar to the way it worked in Oriental City — order individually from each kiosk, they'll give you a buzzer which will notify you when your food is ready, and you then go back and collect it on a tray. Staff with large trolleys circulate constantly to clear away any empty trays and dishes. Pleasingly, all food is served on proper crockery rather than disposable, with reusable chopsticks provided too.

Decor is in browns, blues, and greys, and seating is a mix of banquettes and freestanding chairs, at a mix of smaller (4-person) and communal tables. When Kake visited on a Monday lunchtime in September 2017 there were quite a lot of people in, but still plenty of free seats.

As of September 2017 the food options include Chinese (bakery, dim sum, roast meats, Hakka, Sichuan), Indian, Japanese, Korean, Taiwanese, and Vietnamese. There's a bubble tea kiosk which also sells egg waffles, and there's a vegetarian kiosk selling dishes using mock meat. Some of the kiosks are run by independents; others are outposts of established chains such as Four Seasons, Royal China, and Wonderful Patisserie.

One 68 Dim Sum (run by Royal China): Steamed chilli pork dumplings (红油饺子; £3.65 for 3) photo were pretty good, though the sauce was too sweet and not spicy enough for my taste. The wrappers were smooth and silky, and the meat inside was of good quality.

Umi (website): Salmon and avocado maki with sesame seeds (£4.80) photo wasn't very good. The rice was mushy and gluey, the avocado was over-ripe, and the salmon had very little flavour.

Kake's verdict: I could only try a limited selection since I was on my own, and there's plenty more to try, so I'm not too put off by the less-than-great sushi. I'd like to come back with more people.

Accessibility: Step-free via a lift. There are two accessible toilet cubicles.