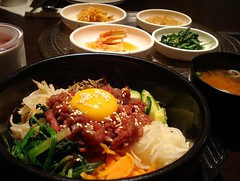 Note that New Malden has a significant Korean population, and a Korean food festival is held there every year. It also has quite a few Korean restaurants. There's another pocket of Korean food places behind Centre Point.

Auto-generated list of places serving Korean food (view them on a map):