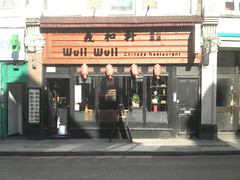 Sichuan restaurant on Camberwell Church Street in Camberwell, opened in September 2010. As of December 2010 they also do takeaway and delivery.

It's relatively upmarket for Camberwell, with a decent-sized wine list and fairly smart decor, certainly rather smarter than Silk Road, the other regional Chinese place along this street. As of January 2011 the menu is divided into two halves, with the usual Anglicised staples at the front and a bilingual (Chinese and English) list of the good stuff at the back.

Kake and Laura visited on a Wednesday evening in January 2011. There were a few other customers, but plenty of free tables.

Smacked cucumbers in hot and garlicky sauce (東北拍黃瓜/dōng běi pái huáng guā; £4) weren't bad, but would have been better if they'd been "smacked" just a little more, as the purpose of this procedure is to break up the flesh and let the dressing penetrate fully. The dressing itself was also a little watery.

Cooked lamb with cumin (孜然羊肉/zī rán yáng ròu £7.50) was rather too salty, and the proportion of meat to onions in the dish seemed rather low for the price. It did have a nice scent of cumin though, and the meat was fine aside from salt level.

At the end of the meal, we were given some complimentary grapes and a couple of slices of frozen cake; we weren't sure if the cake was actually meant to be served frozen or not, but we ate it anyway. No service charge was added to the bill.

Kake's verdict: I was a little underwhelmed, but I've had far worse, and at least they're doing proper Chinese food as well as the Anglicised version. I'd give them another go, since there are other things on the menu I'd like to try, and it's possible that we just didn't order the dishes they do best.

secretlondon tried a takeaway from here in November 2011. They do free delivery between 5 and 11pm for orders over £10. Their takeaway leaflet has a section of Sichuan dishes and some other interesting things scattered amongst the standard sections. I had boiled dumplings in chilli oil (£4.50), sour & spicy fried potato silvers (£4.50) and beef with coriander in hot pepper sauce (£7.50). I got a free can of pop and bag of prawn crackers for spending over £15. I found the dumplings okay but was disappointed by the potato which was a bit like shredded cabbage. The lamb was the best but I agree with Kake that I was underwhelmed. I might try it again.

Accessibility: A small step up to get in. The toilets are in the basement, down a staircase with a handrail and one bend.