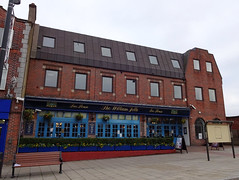 The William Jolle was a Wetherspoons pub next to Northwood Hills Station. It closed down in late 2016.

The pub comprises a single large room with a low ceiling, broken up into smaller areas with wood panels and railings. A long bar with two banks of six handpumps each stands opposite the entrance, and there are a few booths along the side walls, backed by shelves of hardback books. A dartboard is mounted in a corner by the front of the pub, with a reasonable space for an oche in front of it. There's also a small outdoors area of fenced-off seating along the street, with a couple of tables.

Kake visited on a Thursday afternoon in November 2015. There were quite a few people in when I arrived around 2:30pm, but still plenty of free tables. No music was playing (as is usual for Wetherspoons pubs) but there was a good buzz of conversation. The flatscreen in a set-aside area was showing horse racing, with the sound either off or turned down very low. Several people were taking advantage of the regular Thursday "curry club" offer, with a distinct smell of spice in the air.

Of the twelve handpumps on the bar, seven were clipped for fairly standard ales and the remaining five for more interesting ones: Ringwood Forty Niner, DBC Jurassic Dark, Vale Brewery GMT, Twickenham Yakima Valley ABA, and Exmoor Exmas. A half of lime and soda was 40p, and came with not one but three slices of lime.

Kake and friends previously visited on a Thursday evening in March 2009. The place was fairly full, but there were a few free tables. Most of the handpumps were on, though some were duplicates and others had "coming soon" signs on. Ales that were actually available included Ruddles (selling for only 99p/pint), Everards Tiger (£1.99/pint), Rebellion Mutiny (with a handwritten cardboard pump clip), and another one with a rugby-themed name. A TV was showing the Simpsons, but it wasn't obvious whether the sound was on since it was over the other side of the room and there was quite a lot of conversational noise.

Accessibility: Level access to the bar and most of the seating area, though all of the booths are up a step. Step-free to the ladies' and to the RADAR-locked accessible toilet (with nappy change facilities); gents' not checked.