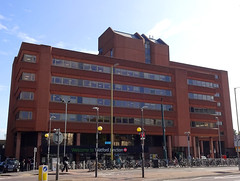 Unusually for TfL-enabled services, Watford Junction Station is in a secret Travelcard zone all of its own. Internally to TfL, it's considered as being in zone W for the purposes of Oyster PAYG and Travelcards, but "zone W" is never used on anything customer-facing.

It's the terminus of the Euston-Watford Line on the London Overground network, and it's also served by non-local lines including the West Coast Main Line.

The Wikipedia entry on the Euston-Watford line notes that London Overground services from here are advertised as being for South Hampstead rather than Euston; if travelling to (or from) Euston, it's faster to use the London Midland services, on which Travelcards and Oyster PAYG are accepted.