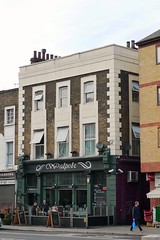 This New Cross pub has now been sold by its owners, closed in mid-2012 and is set to be demolished to make way for a hotel. According to Brockley Central, as of March 2013 the demolition process has begun.

Pub in New Cross, very near New Cross Station. It has come under new management since the start of 2012, so note that some comments below pre-date that change.

Inside, there are a few sofas near the front, and high tables and chairs along one wall. The same chairs are used to provide seating at the bar, and look rather more comfortable than your average barstool (there's even an old dentist's chair). There's some outdoor seating out the front on the street, fenced in from the pavement. One wall of the pub inside retains very attractive original tiling photo.

Ewan visited in March 2012. There are two handpulls at the bar but no real ale is dispensed (there are problems with the cellar, which management are seeking to rectify). However, plenty of real ales are available in bottle, as well as Meantime London Pale Ale and their Wheat beer and Pilsner. Standard keg lagers predominate.

Food options on Sundays are limited to roasts (pork, chicken, beef and nut roast), but the one Ewan had was very nice, with red cabbage and leeks on the side, two Yorkshire puddings and plenty of pork.

They used to serve Thai food before the new management took over, but we're not sure if this is still the case. In November 2007, Kake's seafood curry (about £6) photo was entirely lacking in heat, but had a decent flavour apart from that, and the prawns, squid, and mussels in it were good. Mixed starter platter wasn't bad; everything deep-fried, but not overly greasy as can often happen. Bob's pad krapow was tasty and hot.

When an RGL posse visited on a Sunday evening in November 2007 as part of the East London Line pub crawl, there were a reasonable number of people in but we had no trouble getting a table. When Kake visited on a sunny Thursday in March 2011, there were plenty of people in at 4:30pm, though there were still some seats free. Rock/metal was playing quite loudly. A rainy Wednesday a week later saw fewer customers, though there were still half a dozen people sitting at the bar and chatting. The relatively peaceful ambience was a strong contrast to the very studenty atmosphere at the Amersham Arms across the road.