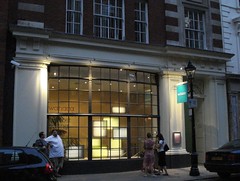 Mexican place billing itself as "authentic street food" in Covent Garden, opened mid-2007. It has several other branches in other parts of London.

They put emphasis on using seasonal produce, sustainable fish, and free-range meat. (See this Times article by the owner.) They even offer a British wine — it's pricy though; a sparkling rose at £45. (Other wines start at £11.75, or £3 by the glass. All wines except the sparkling one are available by the 175ml glass, 500ml carafe, or bottle.)

We visited on a Thursday evening in July and a Friday evening in September; we had to wait a little while for a table on both occasions (30-50 minutes), as a consequence of their policy of not taking bookings. On the first occasion, shortly after they opened, they let us order drinks from the bar while we waited; on the second occasion with the queue almost reaching the front door, they let us effectively book a table and return later.

Our waits for tables may also be explained by the fact that although the restaurant is reasonably large, the tables are spaced quite widely apart. Similarly, each diner is allocated quite a bit of space at the table; a good design choice, since the street food options all come on their own dishes, so you do need some space to put them! Tables and chairs are rather reminiscent of chunkier, sturdier versions of canteen furniture, which works well with the turquoise and green of the walls and ceiling.

The staff were very friendly and enthusiastic, and practically falling over themselves to give us free stuff during our first visit — two refills of tortilla chips, guacamole, roasted nuts — I may have lost track of what else they assured us was "on the house". (The freebies didn't last past the initial month or so of opening.)

The food is very reasonably priced — burritos cost between £5.50 (marinated chicken, or sauteed summer vegetables) and £6 (char-grilled steak), and main courses between £7.75 (chargrilled vegetables with chipotle slaw and rice) and £11 (fish of the week with tomatillo sauce, rice, and beans).

The heart of the menu though is the "street food" section, which recommends choosing 2-3 dishes per person; these are all priced between £3.25 and £5, and include tacos, tostadas, quesadillas, and taquitos, with fillings ranging from aubergine, potato, and goats' cheese to slow-cooked pork. You can also get a set selection for two people to share, at £22.50.

One unusual starter is pork scratchings served with guacamole (£3). Bob says it's actually pork crackle rather than pork scratchings; whatever you call them, they were very good, tasty and light and not at all greasy. We also tried the Wahaca nuts (£2), which are supposedly "roasted with garlic and chile de arbol"; although they were perfectly nice nuts, neither garlic nor chilli was detectable.

The rest of the food was competent too. On our first visit Kake really wished for a slightly heavier hand with the seasoning; nothing except the salsa had even a hint of either chilli or salt. Notable exceptions were the aubergine, potato, and goat cheese quesadillas (£3.50) and the chorizo, thyme and potato quesadillas (£3.75), both of which include intrinsically salty ingredients. Fish tacos (£4.25) could have been great, but were let down by a greasiness which was both excessive and rather surprising, since it wasn't present in the other dishes. These problems had been redressed to some extent by our second visit in September 2007 - while not fiery hot, the food was adequately seasoned and spiced. (A quibble with the serving temperature of the food had also been resolved.) The chilli sauce and salt remain on the tables for people who still feel the need for them, and two bowls of spicy salsa were provided to us for spooning over the food.

Drinks were good. Classic margarita (£5.50) was perfect apart from the use of table salt rather than flake salt on the rim of the glass; Mojito DF (£6) was wonderfully appley, and the Reserva Malbec we ordered a bottle (£15.95) and then a carafe (£10.75) of went perfectly with the food.

On Ewan's visit in November 2007, the place was very busy and we had a group of eight, so they took our names and we retired to a local pub for the hour-long wait, though they called back about 45 minutes later and we returned to be seated. They were doing Day of the Dead celebrations, so we were all offered shots of a (very high-quality) tequila, which was a good start to the meal. Waiters were very friendly and chatty, and the food was excellent, especially the frijoles (refried black beans). One of our dining companions who has been to Mexico wasn't convinced that it was "authentic", but she was still very happy with the food. Churros and chocolate was a highlight of the dessert menu, not to be missed!

Comment added by Anjou: I thought the place was a little souless despite good efforts by the friendly staff. The fish tacos were very greasy good point and the rest lacked real flavour and kick. The churros and hot chocolate were delightful. The try platter was not particulary good however it is basic street food in bright surroundings. Happy to try and recommend will not be a regular returner.

Comment added by poooook: Definitely worth arriving early to avoid the queues- there wasn't a queue at around 17:45 on the Wednesday I went, but it does get busy quickly. Have been twice and thoroughly enjoyed it, particularly the quesadilla.