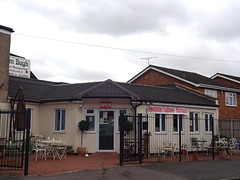 Micropub in Upminster, in the Good Beer Guide.

It opened in November 2015, originally as a snack bar which also sold real ale.

It's a single room, with a tiled floor and high but relatively comfortable banquettes around the walls. Dried hops decorate the ceiling, and exposed brickwork adds interest. There's also a reasonable amount of outside seating on the railing-enclosed forecourt.

As is usual for micropubs, there's no actual bar, just a small service desk to one side. A window in the back wall offers a view onto the casks in the "cellar", from which the ales and ciders are dispensed on gravity. Small boards above this list the current options, which change frequently.

Kake visited on a Saturday afternoon in September 2016. There was one other customer when I arrived around 1:15pm, and two others turned up while I was there. No music was playing, and I had interesting conversations with all three other customers.

The owner gave me my first drink, a half of Fat Cat Porter, for free, since it was the last one out of the barrel and hence a bit flat (though otherwise fine). My second, Tring Sea Vixen, was £1.80/half and in good condition.

Accessibility: A ramp to get in, and no steps to the toilets. All the seating is at high tables.