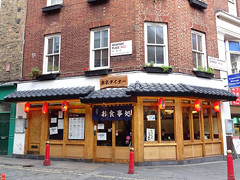 Small, diner-style Japanese restaurant on the edge of Chinatown, just around the corner from Leicester Square Station.

It's been around for quite some time (since 1992, according to its website), and seems very popular for a quick meal at a fair price. The decor is sparse and the service is basic but not brusque. Tips are not accepted, by policy, which makes a meal cheaper than it might appear at first.

bob and Martin visited on a Sunday evening in June 2018. The ground floor room was busy but we were asked to go downstairs which had plenty of room. Katsu don (£13.10) photo with extra rice was fine, although due to being cooked with the egg the coating on the pork wasn't very crispy. Agedashi tofu (£6.70) photo was tasty. The soba noodles with chicken looked fine and Martin had no complaints. We had the free green tea to drink and were brought several refills.

Kake and three friends visited previously, on a Monday evening in May 2007. Three of us had bento boxes, which included seaweed salad, three generous pieces of salmon sashimi, rice, cold fried aubergine, and protein of choice (two of us tried the chicken kara fry at £13.90, one of us the salmon teriyaki, at £14.50). I can't remember what the fourth member of our party had — something in a bowl — but he seemed to like it. We noted that there was a vegetarian bento box (£9.90) on the menu, listed as also being vegan. The menu also included sushi, with a 13-piece nigiri/roll set priced at £9.90. The house wine (£6.90) was perfectly acceptable, and the green tea (free!) was very good.

Accessibility: The main seating area is quite cramped. There is more seating in the basement, which is also cramped. There are stairs to the toilets.