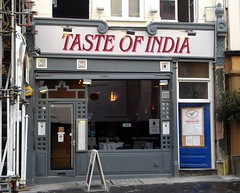 Taste of India was an above-average standard curryhouse near Covent Garden; it has now closed. As of September 2011, Hot Dinners reports that the site has been taken over by the people behind Polpo/Polpetto/Da Polpo/Spuntino, who will be opening "a kind of Jewish deli with cocktails" there in November.

The information below is retained for people who want to know what Taste of India used to be like.

bob visited on a Saturday evening in November 2009. Most tables were taken but they were able to fit me in. The restaurant can seat about 50 people. Chutneys (50p per person) are normally already on your table, and one poppadum (75p) per person is brought when you sit down; no indication is given that these are to be paid for. The chutneys were actually quite good, with the lime pickle having quite a big chilli kick.

I started with the kebab platter (£6), which consisted of a tender lamb chop, a decent piece of chicken, and a pretty good tandoori prawn.

The mains were what you would expect to find in most curryhouses, although there were some interesting dishes in the "Taste Of India specialities" section of the menu. From this section, I chose the hara mirch ka gosht (lamb with onion, green chilli, mint, and lemon juice; £10). The lamb was cooked about right and the sauce was subtle but had some heat. A side dish of aubergine crash (tandoor-smoked aubergine with garlic, onion, and tomato; £6) was okay. Pilau rice (£3) was fine and didn't use food colouring. Keema naan (£3) was very good; the dough was crispy in places, and the filling wasn't dyed bright red.

To finish I had the crocante (£5), which was fine, albeit covered in far too many nuts. (They didn't have my first choice dessert; I think because they longer do it, which was a shame since how can deep-fried things be wrong.)