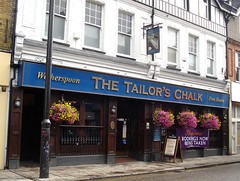 It's a fairly standard Wetherspoons shopfront conversion. A framed display inside the pub gives a few details of its history, noting that one of the two shops which were converted to form the pub was used as a tailor's shop for many years, hence the name of the pub.

It's divided into a few areas inside, separated by brickwork pillars and frosted glass screens, with raised seating areas to the front and back. In the middle, four fruit machines flash silently at each other across another small section of seating, and a staircase leads upstairs to the loos.

The bar has two banks of five handpumps each, which on our September 2013 visit were clipped for Cairngorm Trade Winds, Sunset Red (brewed in the UK by American brewer Mark Szmaida), Exmoor Gold, Young's Special, Spitfire, Abbot Ale, and Ruddles Best, as well as two real ciders: "Tempted?" Summer Sweet Irish craft cider and Bottle Kicking Scrummage. A pint of lime and soda was £1.05.

Kake visited on a Saturday morning in September 2013. There were plenty of people in when I arrived a little before 11am, though still some free tables. No music was playing. A flatscreen toward the back of the pub was showing the news with the sound off and subtitles on. Service was cheerful and friendly.

Accessibility: No step to get in. It's step-free to the bar, some of the seating, and the accessible toilet. The rest of the seating is up one or two steps, and the other toilets are up a flight of stairs with a sturdy handrail on both sides and at least one bend.