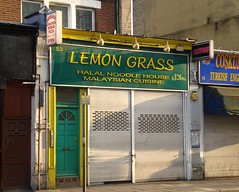 Now closed; used to be a Malaysian restaurant and takeaway called Lemon Grass and then a nameless North African cafe on Camberwell/Walworth borders. As of January 2009 the site has signage for a beauty salon.

It has replaced Lemon Grass, a fabulous Malaysian restaurant and takeaway in Camberwell that also had a branch in Oriental City, which closed early in 2008. Recently some building work seems to have been taking place, and now (31 August 2008) it is open again. The Lemon Grass sign was illuminated (and pictures of Malaysian food were still on the walls), though this is now another North African cafe.

Currently they only have sandwiches, drinks and couscous with soup and meat. secretlondon had the latter for £3.50 takeaway - it was a large container of couscous with another container of vegetable soup with chickpeas and peppers. In the soup there was a piece of lamb on the bone.

The food was fine and good value. I couldn't find out much about this place as the owners didn't seem to understand my questions. I presume new signage etc will follow shortly.

Think this has closed without ever getting a name.