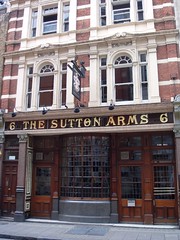 A small pub around the corner from Barbican Station. It's run by Remarkable Restaurants, who also operate pubs such as The Swimmer and The Salisbury.

The pub retains an attractive facade to the street, with some of the original tiling. Inside, bare wooden furnishing stretches along the long thin room, with wooden banquettes and tables, as well as the impressive old Charrington-branded bar. There's a massive pillar in the middle of the bar cutting it in two, and on the Monday evening Ewan visited, there was only one barman, rushing about managing to successfully serve drinks and food and clear tables for the influx of patrons (mostly marking time before a gig at the nearby Barbican Centre).

There are five handpulls for ale at the bar, drawn from the Fuller's range (Pride, Discovery, Chiswick and Gale's Seafarers' Ale were all available). Draught lagers include the Litovel that can be found at all the pubs of this small chain, as well as other familiar choices.

There's a chalkboard opposite the bar listing food choices, a small-ish menu which, given the pub's proximity to Smithfield with its vast meat market, naturally stresses dishes with ingredients sourced from here, although with a range of sandwiches besides (including vegetarian options). Ewan's steak sandwich (£6.50), although hardly large, had a thin slice of very good quality meat in a soft baguette, and came with a reasonable quantity of chips on the side.

Ewan's verdict: There's a boisterous atmosphere to this place, and a pleasant one, contrasting rather starkly with the almost empty style bar it adjoins. It's probably the best bet for a drink near the Barbican.