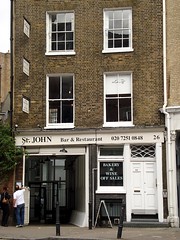 English restaurant in Clerkenwell, just north of Smithfield market. It received a (some would say long-overdue) Michelin Star in 2009. There's also another branch in Spitalfields. The chain also had a brief venture into the hotel industry in Soho (now under different ownership).

St John specialise in meat, meat, and more meat; and especially the parts of it that aren't usually eaten: tripe, sweetbreads, tongue, heart, and their signature dish of roast bone marrow served with parsley salad and toast. They're also quite keen on snails, and they do cobnuts in season. The menu changes daily and can be viewed on their website.

They offer a "feasting menu" option for large groups; you do need to book in advance, and select from a limited menu (up to two starters and desserts), but this gives you the chance to order an entire roast suckling pig, which will be brought in whole and carved in front of you. The head is cut off and presented separately, with two large trays holding the carved meat, crackling, stuffing and trotters. A pig serves 14–16 people and costs £330 (as of March 2010), payable in advance. On Ewan's visit with a group of 16 in March 2010, the pig was excellent quality, while enough starters and desserts for everyone were served on several trays placed at intervals along the table. Our table had the marrow as well as potted pork for starter, with a rich and tasty chocolate mousse (served with crème fraîche and biscuits) and the dependable Eccles cakes with a huge chunk of Lancashire cheese for pudding.

Kat and Rick have visited several times (most recently in April 2015), thoroughly enjoying each occasion. Our favourite starters have included octopus (wonderful, not at all chewy or rubbery, huge portion) and the bone marrow; main course highlights have been a roast lamb with turnips (melt-in-the-mouth), pigeon with lentils (excellent) and braised rabbit (rich and mustardy). We've always found the staff helpful with recommendations and explanations. The desserts are also good; the lovely chocolate mousse had the texture of a brownie on the outside, but was soft in the middle, and the Eccles cake with Lancashire cheese went down very well too.

Vegetarians are catered for — although there's generally only one main course vegetarian option, it tends to be interesting and worth eating, rather than being an afterthought (it's rarely if ever vegan, though, and it doesn't seen to change as often as the meat options do). Examples we've seen include courgettes with butter beans, and fennel with Berkswell cheese. On Ewan's April 2009 lunchtime visit, the vegetarian starter was a fantastic nettle soup (£6) photo, not at all stingy in the generous serving, creamy without being too filling, so setting up the other courses well. The vegetarian main was lentils with goat's curd (£13.50) photo, and if the lentils were less than spectacular, the curd was lovely, fluffy but filling. A dessert of Eccles cake with Lancashire cheese (£6.40) was a particular highlight photo, the cake crusty but with a ginger kick and the dried fruit balanced by the creamy texture of the cheese, of which there was almost too much, but that's hardly a criticism.

On the same visit, Ewan's non-vegetarian companion had the brown shrimp with white cabbage (£7.20) photo, which she certainly liked but not nearly as much as her main, the ox heart with beetroot and horseradish (£15) photo, cut thinly and an order above the same dish as tried elsewhere. Apart from the fine Eccles cake, an excellent baked cheesecake (£6.90) was offset by a coating of the sharply alcoholic liqueur de coing, derived from quince fruit photo.

Kake has visited several times over the years (most recently in July 2006), and never been disappointed. Dishes I've enjoyed in the past include Puy lentils and Swiss chard (a side dish), and chickpeas with sausage and snails (fantastic: the chickpeas were cooked right, the sausage was very meaty, the broth was rich and well-spiced, the slice of bread lining the bottom of the dish was a very good sourdough, and the snails were large and moist and well worth eating).

There is additionally, a bar area in the courtyard with some small table seating around the edges and along the entry corridor, which gets predictably crowded in the evenings after work. There are draught beers available including quite a few by Meantime, as well as three handpulls for ale -- Wadworth 6X and Black Sheep were on during an April 2009 visit (and still there a year later), with the other off. In April 2015 the handpulls featured Black Sheep and two Redemption beers, the Porter and Rock The Kazbek (deliciously well-kept). There is also a bakery stand, with breads and cakes available to take away.