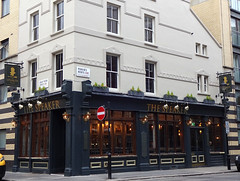 Pub in Westminster. It reopened in November 2018 after a refurbishment and a change of ownership to the Bermondsey Pub Company.

There's not a lot of space in this long, narrow corner pub, and the bar takes up almost half of it. Seating is primarily provided by tall stools at the bar and along the long windowed wall opposite, but there's also a small banquette at the front window and another at the back. Walls are wood-panelled, echoing the bare wooden floor and painted-wood bar.

Windows are a decorative mix of clear and dimpled glass. Perhaps reflecting its location in the land of Government, the inverted black domes of at least five security cameras are dotted between the chandelier-style light fittings overhead.

When bob, Martin and Northern Steve visited on a Friday evening in January 2009 there were a couple of tables left at 6:15pm, and it then filled up some more, but by 8pm it had mostly emptied out again. When Kake, Martin, Laura and several others visited on a Monday in January 2019 there were around half a dozen other customers when we arrived a little before 4pm, but it slowly began to fill up around 5pm. Music was playing, not too loud, a mix of instrumental jazz and soft rock.

On our November 2007 visit by bob, Adam, and Jakob, Spitfire was £2.70/pint and Young's bitter was £2.60/pint; both were drinkable (note that "drinkable" is a term of praise, coming from bob). On our January 2009 visit Spitfire and Young's bitter were still on, and the two specials were a Bramble Stout (£3.30/pint) and Dark Star Espresso Stout. All five handpumps were clipped on our January 2019 visit, for Enefeld London Porter, London Brewing Co Beer Street, Timothy Taylor Landlord, Sharp's Doom Bar, Twickenham Naked Ladies. A pint of lime and soda was £1.30.

The pub has no kitchen and doesn't serve food.

Accessibility: A small step to get in, about 1-2 inches (it's on a slight slope, so varies along its width). Toilets are up a steep, narrow flight of stairs.