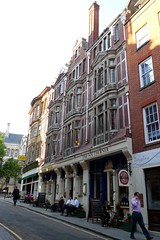 The Southerner was a pub a few doors along from the Edgar Wallace, and near the intersection with the Strand. It has now closed.

As of late-2014, the building is occupied by a brewpub called Temple Brew House. Before that it went through a period of a few years as a German bar called Bierschenke.

The information below is retained for people who want to know what it was like as the Southerner.