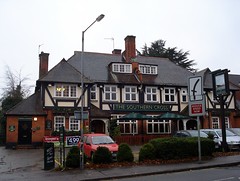 Kake visited on a Thursday afternoon in November 2008. As well as the three handpumps on the front of the bar offering fairly standard options (Adnams something, Bombardier, Deuchars IPA), there were three hidden around the side with beers I'd never seen before (and failed to take notes on). I had Mordue Radgie Gadgie at £2.85/pint, and it was fine. Their commitment to real ale was underscored by adverts on the bar for the Watford Beer Festival, which started that day. Service was very friendly.

The place has a little of the ambience of the good kind of mid-range hotel bar, with sofas and nooks breaking up the fairly large space. Music was playing, not too loud, and generally inoffensive. There were only a few other customers in, both men and women, young and old, some seemingly regulars.

Food is served all day (until 9pm on the Thursday of my visit, not sure about other days). The menu is fairly standard. I tried the mixed starter/sharing platter (£4 for a one-person size) photo. It wasn't bad. The onion rings had actual rings of onion inside them, though the batter became soggy fairly quickly. The potato wedges were a little mushy. The chicken wings had a pleasant hint of heat, but were very dry and chewy. Not too bad for the price and quantity, though.

The 2009 Good Beer Guide says that board games are available; also, that children under 14 are not allowed in the bar. An sign inside (November 2008) advertised pub quizzes on Tuesdays, Thursday, and Sundays from 9pm (though a board outside mentioned only Thursdays and Sundays). According to the 2009 Good Beer Guide, the Tuesday quiz is entertainment-themed while the Thursday and Sunday ones are general knowledge.

According to a sign seen in November 2008, accommodation (twin and single rooms) is available, including continental breakfast as an optional extra.

Accessibility: Shallow ramp up to get in, level access to bar, seating area, and ladies' once you're in. I didn't see an accessible toilet, but the place is quite big and I didn't explore all of it, so there may well be one.