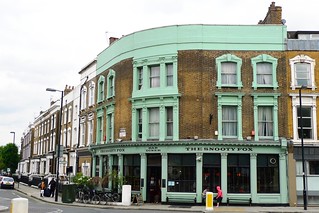 A pleasant, airy pub in Highbury, near Canonbury overground station, much beloved of the North London CAMRA mailing list.

The decor is quite 'retro' in feel, with pictures of old rock/soul musicians and an old-school 7" jukebox near the door. However the large windows and high ceiling make it seem far more spacious and friendly than your regular dingy jazz-dive. There is a small outdoor seating area on the street accessible from a side door, but fenced off from the rest of the street.

On a Sunday afternoon visit in August 2012, there were at least four handpumps dispensing Redemption Trinity, St Austell Tribute and Ilkley Siberia rhubarb saison, as well as cider. The website says that beer and cider festivals take place at least twice a year.

Food is served 5pm-10pm Mondays to Thursdays, 5pm-10:30pm Fridays, noon-10:30pm Saturdays, and noon-9pm on Sundays. Kat didn't try the food but one of her party ordered an absolutely massive plate of risotto which looked amazing.