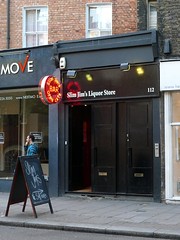 Slim Jims is indeed a rather slim bar, nestled anonymously along Upper Street with a simple black and neon doorway leading to a couple of booth tables nestled in a dark corner, then some more steps up to the bar area. Red bar stools are lined up along the bar as well as a back wall, with five diner-style booths backed by plywood around the edge of the space, each seating four people comfortably.

Decor is atmospheric, bare bricks behind the bar, largely dark but with flashes of colour and neon, and raucous music playing over the speakers (rock music, a good selection, but played just a little too loudly) photo of interior.

The bar has a few draught taps with Birra Moretti and Bulmer's cider (each about £3.80/pint), as well as Amstel, Heineken, Guinness and Kronenbourg. There's a chalk board with cocktails and house specials, all generally around £6.50-£7. They also have a paper menu listing their standard cocktails and whiskies, although it does have a few spelling mistakes (and has a headline of 'Bourbon' above all of their American whiskies). Whisky prices range from £3-7 per shot and seem reasonable. Prices as of December 2009.

On Ewan's visit it was a bit difficult to get details of what the specials were (the Slim Jim and Slim Jane top the list), but the bartender mixed me an orange variant on an Old Fashioned (this may have been the Slim Jim) which took a few minutes but was superb when it arrived photo. In part this may be due to the extensive collections of whiskies (particularly bourbons and ryes), not to mention the tequilas, gins and other cocktail bar staples, on display behind the bar.

Billy visited on a Wednesday in December 2009 at about 7pm and found it quite empty, with the music lower than on Ewan's visit. I had a Manhattan that was quite nice, although missing an ingredient, and a couple of nice whiskies. The bar staff were quite friendly, even if they did hide from the slightly annoying wine drinking customers who arrived as I was leaving - they don't have much of a wine selection.

Some of the more interesting whiskies are even on sale, locked in a small cabinet above the bar and retailing for sensible prices (a bottle of Rittenhouse Rye that I spotted was listed at £22).

The website lists a burlesque night on the last Thursday of every month from 10pm, and live acoustic music on Sundays from 9pm.

Accessibility: There's a step in, then more steps up to the bar. Toilets are downstairs from the back of the bar area.