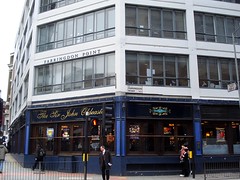 bob and others visited in October 2007. The London Pride was drinkable, and the Abbot Ale must have been acceptable. Like most Wetherspoons these days, there was Westons Old Rosie available. See bob's photo of the beer prices.

Accessibility: Two steps up and then three steps down to get in. There are two more steps inside the doors of the ladies' and gents' toilets.