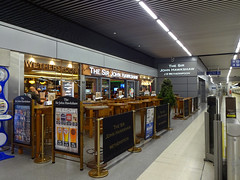 It's an odd little space, fitted out in what was presumably originally intended as a retail unit. Outside its entrance, tall tables and stools are arranged in a rectangular space alongside the barriers separating drinkers from the passengers emerging from Platform 1. Patio doors then give access to the low-ceilinged interior. Seating inside is also primarily on high stools, though there's also a high banquette along the side wall, two small normal-height tables on either side of the entrance, and a tucked-away area in the far corner with a handful of larger normal-height tables.

Decor is relatively coherent, with wooden flooring (either real, or a very convincing fake), varnished wooden tables, a copper-topped bar, and chairs upholstered in light brown, though one does wonder slightly at the choice of turquoise for the banquette at the side. One nice touch is the large semicircle of metal embedded in the flooring and engraved with the name of the pub.

Kake visited on a Tuesday morning in October 2018. There were a fair few people in when I arrived around 10:45am, most of them eating a late breakfast or early lunch. More arrived while I was there, to the point where it felt quite lively by 11:15am. No music was playing, as is usual for Wetherspoons, but a flatscreen was showing the news with the sound on too quietly to hear.

The handpumps were clipped for five real ales: Windsor & Eton Knight of the Garter (rebranded to Fright of the Garter for Hallowe'en), Sharp's Doom Bar, Fuller's London Pride, Greene King IPA, and Liberation IPA; and one cider: Knights Malvern Gold. A pint of lime and soda was £1.20.

Accessibility: Step-free access from street to station via a lift, and no steps to enter the pub from the station concourse. Most of the seating is on high stools, but there are a handful of normal-height tables. There's no customer toilet — instead, staff will direct you to the toilets in the station.