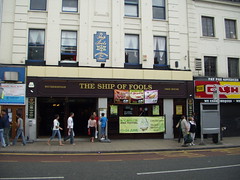 The Ship of Fools was a Wetherspoons pub in Croydon. It has now closed. The last day of trading was 9 June 2013.

Wetherspoons sold the remainder of their lease to Sainsbury's, and the building reopened at the end of August 2013 as a Sainsbury's Local photo. See London Road History article for more information (and for info on the history of the building).

Wetherspoons pub in Croydon. It's been in and out of the Good Beer Guide a few times.

Note: As of early 2013, the Ship of Fools is due to be turned into a Sainsbury's Local. The Croydon CAMRA mailing list reports that the last day of trading will be either 8 June or 9 June.

It's a typical Wetherspoons shop conversion — low ceiling, little natural light. (There is however a little unexpected pocket of natural light at the very back, where three windows look onto the backs of other buildings.) A dais opposite the bar includes sofa seating, and there are a few booths at the back.

Kake has now visited several times. On a Wednesday evening in September 2011, there were a number of interesting guest ales on, all at £1.75/pint, including Dark Star Saison and Hepworth Pullman. They generally have a couple of real ciders (mostly Westons) and perries too. In February 2012, a pint of lime and soda was 80p. On all our visits, no music was playing but there was a nice low buzz of conversation. Service has generally been very friendly and helpful.

Free wireless is supplied via The Cloud.

Accessibility: No step to get in, to the bar, to most of the seating, and to the RADAR-locked accessible toilet. Some of the seating is on a dais, and a few of the tables at ground level are high ones, though most are normal-height. The other toilets are in the basement, down a straight wide stairwell with sturdy handrails on both sides. It's worth noting that the accessible toilet is right at the back, behind a little wall, and not immediately apparent unless you know where it is.