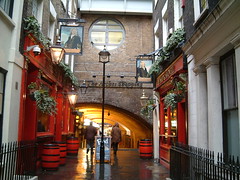 The pub is actually in two entirely separate halves, one on each side of an alleyway. For this reason, it's often used as the start and finish of a Circle Line pub crawl. Decor is traditional photo.

The southern half has a smaller bar, though it also has a bookable upstairs room (the Crows Nest) for up to 35 people. Alternatively, you can book one entire half (the smaller half) of the pub. When not booked, the Crows Nest is usually quieter, though this half of the pub tends not to be opened until around 5:30pm.

Pumps visible on previous visits included Tanglefoot, Badger, Fursty Ferret, and King & Barnes Sussex Bitter (more or less unchanged in visits from 2008 onwards). They also do the seasonal ales, so in November 2008 they had a very tasty Pickled Partridge. The bar in the southern half has less of a range, but still has four handpulls for ale. bob sometimes finds the beer here to be a bit disappointing; it's just not as good as it really should be. Though I suppose I've only ever been there before noon, so perhaps we always get stale beer.

According to the Ship & Shovell website as of February 2014, food is served lunchtimes only; noon-3:30pm Monday to Friday and noon-4pm Saturday. Ewan tried a scotch egg on a 2014 visit, which was perfectly decent and served in a little tray with mustard.