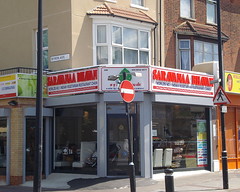 Vegetarian Indian restaurant/cafe on the High Street in East Ham, part of an international chain with several London branches including one in Tooting. They specialise in South Indian dishes such as dosai, idli, and vadai, and they also do some Indian-style Chinese dishes.

It's a reasonable size inside, though following a refurbishment in 2014 it doesn't feel enormously spacious as it's now filled with booth-style seating. There's also a retail sweet counter in the front section, with various fresh sweets laid out on trays behind a glass guard and packets of savoury snacks piled on top of the counter. A couple of chairs next to it allow customers to wait for takeaway food and/or drinks.

Kake and Ewan visited on a Monday lunchtime in July 2009. There were a fair few other customers in, but still plenty of free tables. Music was playing (mostly instrumental, quite perky, not too loud though).

The menu stated proudly that "all our prices now include VAT", which was reassuring given that this doesn't seem to be the case in some of the other eating places along this strip. Despite this, the prices were as cheap as is usual for the area; see photos of the takeaway menu as of July 2009, though note that takeaway prices are slightly cheaper than eat-in.

We decided to share a few dishes between us. Mini ghee idly sambar (small steamed rice/lentil cakes simmered in a savoury sauce, £3) photo arrived first; they were very tasty, soaked in the sauce and not greasy at all despite the finishing ladle of ghee (clarified butter).

Onion, chilli, and tomato uthappam (a thick, soft fermented rice/lentil pancake, £3.25) photo was also good; hot and clearly freshly-cooked, with nice crispy bits around the edges. The chillies in the filling were nicely warming, and sparingly enough distributed that they didn't overwhelm everything else.

A slight miscommunication led to us being brought a dish of curd (yoghurt) rather than the curd vada (lentil "doughnuts" soaked in a yoghurt sauce, £2.25) that we'd ordered, but once the vada arrived they were just fine, cool and refreshing photo.

Masala tea (£1) was served in a metal cup sitting in a metal bowl/saucer, with the tea overflowing into the saucer (the standard way of serving a "full" tea in South India — it cools the tea down, and you're supposed to drink from the saucer and top this up from the cup). It was fine, though more milky than spicy.

Kake's verdict: Cleaner (especially the toilets!) and a little more formal than some of the other places closer to the station; plus, the food was well up to the local standard. I'd come back.

Child-friendliness: They have at least four highchairs, there's an area to park prams and pushchairs at the front, and there's a pull-down baby change table in the accessible toilet.

Accessibility: A ramp to get in. It's step-free once you're in, and there's a proper accessible toilet.